Throat cancer is not a defined medical illness, but a term often used to refer to any type of cancer arising from the back of the mouth, upper food pipe (pharynx) and voice box (larynx).There are a number of different types of throat cancer and every patient is different, but the two most common type of throat cancers are:

Laryngeal cancer refers to cancer that forms in the tissues of the larynx (voice box). The larynx is a part of the throat, between the base of the tongue and the trachea, and is comprised of three main parts:

Pharyngeal cancer forms in the pharynx, the hollow tube that runs from behind your nose to the top of your windpipe, and is categorised into three types: 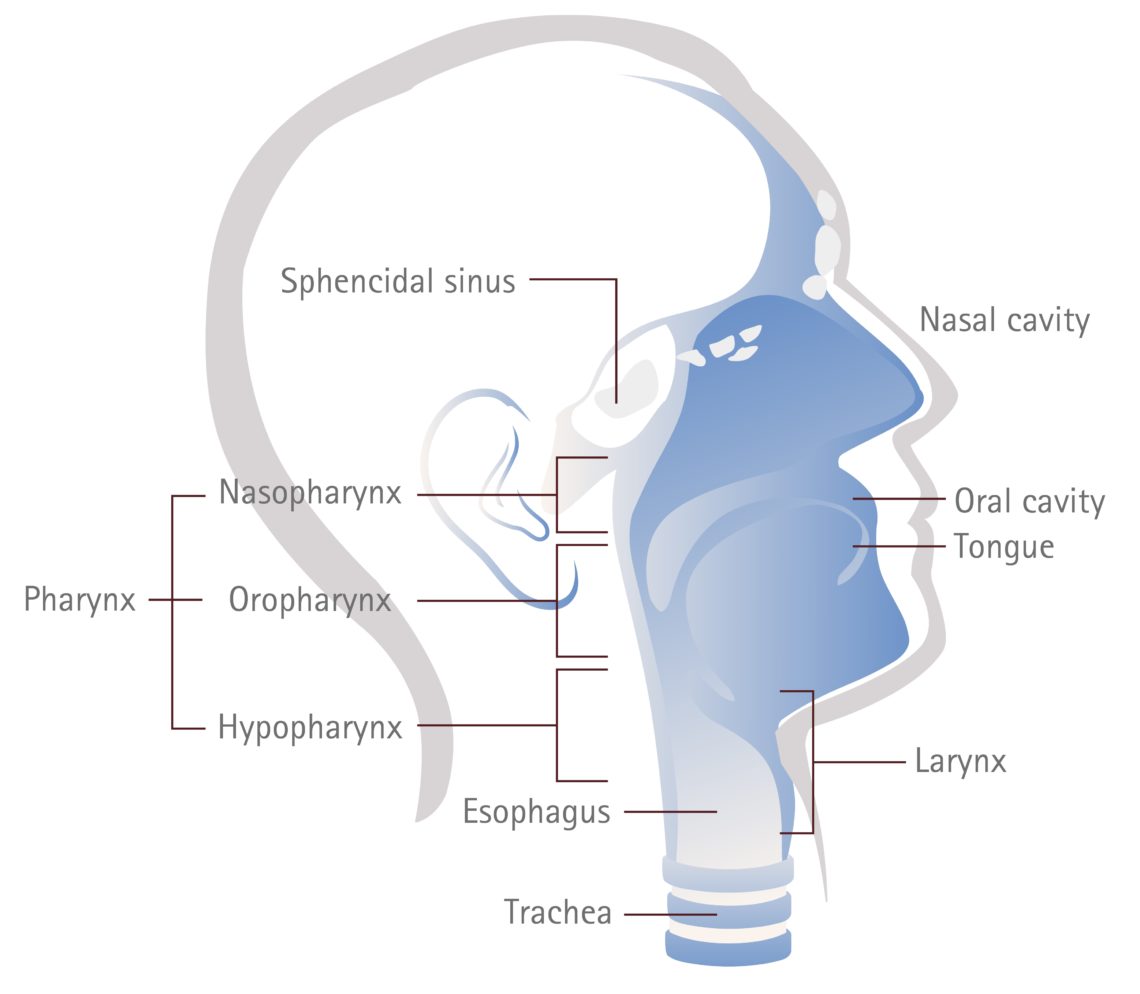 In addition to the risk factors associated with all head and neck cancers, genetic abnormalities and poor nutrition may also play a role in increasing your chance of developing cancer.

Almost 300,000 new cases of laryngeal and pharyngeal cancer were diagnosed worldwide in 2012, making it the 13th most commonly diagnosed cancer in men. The number of throat cancer cases varies considerably between different countries; however, is almost universally more common in men than women. This reflects the differences in exposure to the risk factors known to cause throat cancer. Throat cancer is more common in people over the age of 55, although younger patients can also develop tumours in these sites.

The most common symptoms are a persistent change in the voice (becoming husky or hoarse for more than 3 weeks) or difficulty in swallowing food (often solid food becoming problematic before liquids). Other symptoms may include:

Many of the symptoms described above can occur in individuals as a result of other, non-cancerous conditions. However, it is important that a specialist in head and neck cancer assesses anyone with persistent symptoms. This will usually involve a clinician taking a detailed history and performing an examination of the mouth, throat and neck in the clinic.

Laryngeal and pharyngeal cancers are difficult to access, and so it may also be necessary to undergo a more detailed examination with an endoscopy under general anaesthetic. During this endoscopy, biopsies can be taken of any suspicious areas to help confirm the diagnosis. Radiological imaging of the neck and throat using ultrasound, computerised tomography (CT) and magnetic resonance imaging (MRI) techniques may be performed to help identify the size and extent of any tumour, and any involvement of the lymph nodes in the neck. There are no blood tests that can diagnose cancers of the larynx or hypopharynx, but they may be performed as part of a more general assessment prior to a general anaesthetic.

The treatment options for any tumour depends on the several factors, including its size, location, type and involvement of other surrounding structures. Cancers of the larynx and pharynx are no different in this respect, and therefore any treatment will be tailored to the individual.

Broadly, early tumours of the larynx may be treated with either surgery or radiotherapy. A combination of chemotherapy and radiotherapy are frequently used for slightly larger laryngeal and hypopharyngeal tumours, whereas very advanced disease is mostly treated with surgical resection.

What are the stages of throat cancer?

Like all cancers, clinicians divide throat cancers up into groups or stages, based predominantly on the extent of the disease and aggressiveness of the tumour type. These stages range from I (small, early tumours that still resemble the tissue they have come from, also referred to as well-differentiated) through to stage IV (larger, more advanced tumours that no longer look like the normal tissue type - poorly-differentiated).

Do cancers of the larynx/pharynx spread?

Unfortunately, if not detected early, cancer cells can spread from the primary site within the larynx or pharynx to the glands in the neck (lymph nodes) and even to the lungs and liver. Treating the cancer once it has spread is more difficult, hence the need to try and identify the disease as early as possible.

If I have an operation on my voice box will I be able to talk afterwards?

Small tumours on the vocal cords can be removed while leaving the main structure of the larynx intact. In this case, there may be some change in the quality of the voice with increased huskiness or hoarseness, but generally this does not cause a problem. If the tumour is much larger, it may be necessary to remove the larynx completely, (known as a laryngectomy). Even in this case, there are ways to restore the voice with the use of valves or electronic devices. However, this will be very different to your normal voice and the outcome not as predictable.

Will I be able to swallow normally?

Both surgery and chemoradiotherapy may affect your ability to swallow safely. This may occur because the swallowing mechanism no longer works properly or, often after chemoradiotherapy, because of a lack of saliva leading to a dry throat. During treatment, it may be necessary to have a small tube passed through the nose and into the stomach which can be used to help with supplementing fluid and nutrition intake.

Is it possible to cure throat cancer?

Yes. Unless the cancer is very large and invades surrounding structures that cannot be removed, or has spread to distant parts of the body, the aim of treatment will be to cure the disease. Regrettably, even smaller tumours that are completely removed can come back at a later date, or a new cancer may occur because of the continued exposure to known risk factors.

If I have throat cancer, is there any point in stopping smoking?

Yes. Continuing to smoke will make any treatment less effective and may complicate your recovery. Furthermore, continued smoking will increase your risk of the cancer coming back or developing a new cancer at some point in the future.

Are there trials I can take part in?

How much time off work will I need after treatment?

This can vary depending on the extent of treatment required. Surgical treatment of small tumours may only require a few weeks off work. A course of radiotherapy may last for several weeks and require further time off afterwards. Extensive treatment with major surgery or chemotherapy and radiotherapy may mean several months off.